London – Research from TVT Media, the new global content services powerhouse, shows that 61 languages are broadcast across the European Union and Turkey, highlighting the linguistic diversity within a television market of 600 million people. The research, commissioned by TVT and conducted by Media Asset Capital, reveals France is clearly the king of multilingual content in Europe’s TV markets, with 18 languages available across its 567 channels – including Arabic, Mandarin, Khmer, Turkish, Armenian, Romani and Tamil.

The research was used to create a Media Map showing the secondary broadcast languages in each nation (excluding official native languages and English) – the first in a series of European Media Maps that illustrate the increasingly diverse and complex nature of the European TV market.

The research shows that English is the most broadcast language in Europe and the most common second TV language in European countries, accounting for 792 of the 8,236 linear channels in the EU and Turkey. Other major European broadcasting languages include German (749 channels), French (600), Spanish, Turkish and Italian (over 500 each). The most common non-European language is Arabic (64 channles), followed by Hindi (23), Mandarin (15), Urdu (15), Persian (12), Bengali (11) and Kurdish (10).

Ian Brotherston, Chief Executive of TVT Media, comments: “The comprehensive data we have assembled on the European TV landscape shows just how varied a region it is in terms of languages and cultures, underlining the vast complexity of the market as a whole. It is clear that as the European media and entertainment market continues to evolve and grow – and with the EU championing a Single Digital Market – it is critical for both local and global operators to version their content in a way that meets the diverse cultural and linguistic needs of each distinct market and the segments within it.”

Brotherston adds: “At a time when the shape of Europe continues to change, whether through Brexit, free movement of people within the EU or ongoing migration from other regions, understanding the sheer variety of languages and cultures across the continent is vital. Having a clear picture of just what the European broadcast marketplace really looks like in terms of language and culture can only help broadcasters as they look to the future and take their content to new territories.” 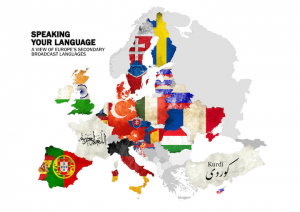 The European Media Map series highlights critical information on broadcast languages, content genres, video on demand services, online platforms and other elements of the TV market in all 28 EU countries and Turkey. The series grew out the capture of in-depth data on licensed broadcasters and video platforms across Europe, commissioned by TVT Media and compiled by Media Asset Capital – with the aim of building an unrivalled understanding of on-going developments in the European broadcast and on-demand media market.

The research for the first paper involved assembling and analysing data on all licensed linear channels in the EU and Turkey – including regional variants but excluding plus-one channels and pure over-the-top (OTT) services.

To talk to TVT about how to navigate the complexities of the evolving European media marketplace, please go to www.tvt.biz or www.digitalmediacentre.com or email us at hello@tvt.biz.