News
You are here: Home1 / News2 / Client News3 / A Time for Tradeshows 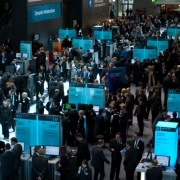 While everyone from postproduction through to content management and delivery prepares for the upcoming shows, so does everyone at the Platform office. I am nearing the end of my internship here and I couldn’t have joined at a better time. I have been able to see the office working at full speed, meticulously preparing every last detail for two of the biggest tradeshows in the broadcast calendar.

TV gets clearer… But a bit more confusing!

Choosing a television is confusing enough as it is and many are still trying to get their heads around HD, LCD and OLED. But the advent of UHD means things are getting to get a little more confusing. Ultra High Definition is the next step up from what is currently known as full HD and has four times as many pixels as regular 1080p, making for a significantly clearer picture for viewers.

A year ago we had little or no UHD sources, but 2015 and beyond will be a different story. Netflix has already begun streaming content such as House of Cards and Breaking Bad in UHD format, alongside a handful of movies -Amazon is offering UHD content as part of its Amazon Prime service, and there are also rumours of Sky launching its own UHD service later this year. But are consumers getting the picture?

GfK predicts a big upswing in the take up of UHD televisions in the UK this year and in 2016. But I am sure the increase in UHD sales will only happen if there is a considerable drop in prices of the TV sets.

Getting Smarter with TV

Ownership of Internet connected sets has seen steady growth over the years, with a 15% increase since 2012. In fact, it is becoming increasingly hard to buy a non-smart model.

But it hasn’t all been plain sailing for Smart TV producers. There have been some issues around consumers not getting the most out of their Smart TVs, and the manufacturers have had to make some developments to really get it moving.

The market leader in Smart TV, Samsung, recently changed its operating system, moving away from Android. Samsung Smart TVs boast more apps than any other platform and have now designed a platform that works more like the mobile devices we use each day. And it makes sense – it provides a familiar, intuitive interface that makes user adoption more seamless. In addition, it opens up opportunities for cross-communication between our TVs and mobiles.

LG has also taken steps to improve its smart TV offering by updating its own operating system to a more graphically rich, more app-rich approach to its TV interface.

Home is where the TV is

One of the most impressive technologies I came across has to be Home Automation, using the TV as a central hub for wider home monitoring and as a central control system.

Two companies in this space are Echostar and Homekit. Satellite provider Echostar has created a product called Sage, which it says is a comprehensive home automation solution. Homekit revealed a number of its innovations at The International Consumer Electronics Show (CES), including a garage door opener, light bulb dimmers and air conditioning control.

While hugely impressive, Home Automation is still in its early stages- but is definitely one that I will continue watching.

For me, the most interesting hardware innovation for 2015 will be bendable TVs. Both LG and Samsung have already confirmed that they will be launching TVs that allow you to select whether you want your TV to work in flat or curved mode, depending on how many people happen to be watching the TV set.

Cynics suspect that 2015 will see a continued ‘toe dipping’ exercise by the bendable TV manufacturers and predict we will only see one or two on offer. I’ll be paying close attention to these developments and will keep my fingers crossed that the price drops, as the 105-inch Samsung prototype shown at CES costs a whopping $260,000!

Overall, it appears that 2015 has some great potential with regard to developments in TV technology. I’m sure that in the time it took me to write this blog numerous innovations have been conceived, and binned. However, the true test for the above-mentioned technologies is their staying power. Many ideas have come and gone, with some ending quicker than my internship; Google Glass, 3D TV and the Amazon Fire Phone to name but a few. Here’s to hoping these technologies have better longevity!