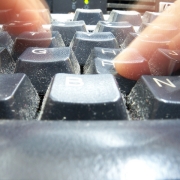 As a millennia living in London, I am naturally impatient. I belong to a generation who is accustomed to being able to order a week’s worth of shopping from the sofa, and I live in a city where a duration of more than three minutes between tubes is considered a long time. As a millennia I also enjoy the privilege of having a wealth of content available at the tap, or swipe of a finger. Thus, you would expect me to throw a tantrum every time an online advert pops up on my mobile device, costing me valuable seconds of devouring content the same way I would gorge on a tub of Ben & Jerry’s Baked Alaska.

However, while online adverts can be a source of mild irritation, like a fly hovering around my head, they have not riled me up enough to declare the ultimate act of war against brands and agencies: downloading an ad blocker. I have realised online advertising serves a purpose, just like TV advertising. I know that if I want to access a piece of content then I will have to sacrifice something, which is having a few adverts infiltrate my consciousness.

Advertisers have realised that while TV advertising is a great way to reach a large number of people at one time, it is less powerful than it used to be. This is because once a programme breaks for adverts, people’s attention migrates to their mobile device as they shift their attention to internet browsing, or social media to quickly bash out a witty status or tweet with the hopes of generating a few hundred likes or retweets, to propel them to temporary social media stardom.

Thus, brands and agencies have begun crossing over to our mobiles, tablets and laptops in a bid to recapture our attention. Online advertising set to be make up 50% of brands and agencies ad spending by 2020, and there has already been a notable surge in the number of adverts infiltrating our mobile devices.

As the old saying goes, you can take a horse to the water but you can’t make it drink. Consumers have responded to advertisers invading their mobile devices by installing ad blockers. The number of monthly ad blocker tool users has risen to 140 million per month in 2014 from 21 million in 2010. I, however, have made a conscious choice not to install an army of ad blockers on my mobile devices.

My reason for this is because online adverts are a necessary evil. To install ad blockers means someone, somewhere, is losing revenue. The content we love consuming has been created by someone, online publications are heavily reliant on revenue from advertising due to the decline of print publications. Ad blockers mean that these content creators will begin losing revenue and if we want to continue enjoying the content they produce then we have to accept that it has to come at some sort of price.

We’ve already seen publications such as The Times move their content behind a pay wall. If we continue to use ad blockers then we will see more and more content providers begin requesting us to pay before we view. It’s easy to view ad blocking as a victory over advertisers, however, a temporary win may lead to a permanent loss if all the content we love consuming moves behind a pay wall.