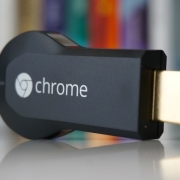 They may look like oversized memory sticks but digital media streaming dongles may well revolutionise the way we find and watch video. The Chromecast recently launched by Google in the UK (and rapidly selling out at a PC World or Curry’s near you) or competitor devices from Sony or Netgear, enable media content and online services to be streamed instantly from mobiles, tablets or PC’s straight onto any HDMI enabled device. Encouraging viewers to use their devices like content-loaded TV remote controls.

Nowadays mobile devices have access to a wide range of media content including via video streaming apps, cloud gaming services and pictures from cameraphones and with a couple of taps on your phone, or alternatively a PC, media streaming dongles are able to serve up this array of content onto a TV screen. They are able to harness the OTT and VOD services on mobile phones as a portable one-stop-shop for content, through which viewers can place their content order and select their screen of choice.

According to Ofcom, only 7% of the UK owns a Smart TV and around 75% of second TV’s within UK homes are currently limited to Freeview broadcasts. Media streaming dongles present an attractive option to bring online content to the many offline devices. Even more so if a media streaming dongle is coupled with a pay-TV subscription for premium content such as via Sky or Netflix.

The TV dongle-style adapters low cost – from £30 – and ease of use make them particularly consumer friendly. By being wireless and easily portable they are in contrast to similarly priced set-top boxes that also offer online streaming to TVs – although Roku is also releasing a dongle. Going one step further for convenience, Miracast, designed by the Wi-Fi Alliance, is being built directly into Sony and Panasonic Smart TVs and doesn’t even require a WiFi network as it uses WiFi Direct on smartphones.

Alongside cost and convenience, device compatibility with mobiles, tablets and media applications is likely to play a key role in the future success of the technology. For example, Google’s Chromecast and Netgear’s NeoMediacast currently only work with a limited range of apps – one of which is now BBC’s Iplayer.

At the forefront of the technology and demonstrating the potential of the technology is the ‘mirroring’ of browsers or all device activity onto any HDMI enabled screen. Both Chromecast and Miracast are evolving this functionality allowing the projection of a mobile screen to share with friends – or just to view content on a better screen. I fully anticipate this feature will become increasingly user friendly so as to unlock from the small screens the innovative video, gaming or browsing applications that make our mobiles indispensable.

The sharing of content between mobiles and TV’s when effectively coupled with second screen apps and accompaniments for content discovery and social media engagement would seem likely to encourage consumers to look to their mobile phone when discovering and selecting TV content.