News
You are here: Home1 / News2 / Client News3 / Collaboration in the digital age: blessing or curse? 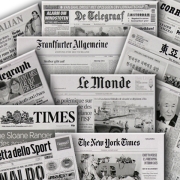 CES always kicks off the tech year and sees the tech press dominated by coverage of shiny new TV screens and sleek (and sometimes slightly odd) gadgets launched at the annual Vegas tech fest. However, the news agenda was hijacked by an incident that happened in Paris on January 7th, which stole most of the international headlines until January 11th.

Being French – and a Parisian at that – it hit close to home. However, I was surprised and impressed in equal measure to see that it was featured in international news in mere minutes, with SKY and the BBC covering the event almost as quickly as French broadcaster BFMTV and daily newspapers Le Figaro, Le Monde and the free press in Paris. Breaking news coverage in France is an uncommon phenomenon, and this episode raised many questions about the responsibility of the press in providing verified information, ensuring that presumption of innocence is respected and that graphic user-generated content is soundly censored.

In its coverage of the news, the French national press showed a great capacity to deploy multimedia outlets in the blink of an eye, providing written, visual and video content as the incident unfolded while the print editions offered detailed reports on the events leading up to the day. While this was put in place to cover an extraordinary event, it demonstrated that allowing editors from all divisions to collaborate to cover a story really resonates with consumers.

What’s more, the traditional press relied heavily on user-generated content, whether via amateur pictures, videos or tweets, which came into the mix for the first time. This meant that everyone could become an expert on a topic related to the news: over night, secondary school students sharing their views of the incident, neighbours providing detailed testimonies and official experts discussing the bigger picture on broadcast media all became go-to references, radically transforming the way the media have traditionally perceived thought leadership.

The event really brought collaboration to the fore, even among consumers. This is in part due to Joachim Roncin, art director at French free print newspaper Stylist, who designed the logo “Je Suis Charlie”, the de facto tagline of the tragedy on Twitter and Facebook. It even became one the most widely used hashtags in the history of Twitter with over 6,63 million tweets since the logo was published for the first time by Roncin. Twitter provides humongous amounts of news in real-time, which means that some of it can be lost in the noise. However, the immediate uptake of the news showed that social media has really become another medium alongside breaking news coverage on broadcast and online media. The hashtag and logos even extended way beyond virtual media to become the rallying cry of demonstrations around the world.

National papers are usually seen bickering over audiences, coverage of stories, political alignment. Once more, the incident turned this perception upside down and demonstrated that the industry could work as one, with the French press union, Google and The Guardian investing copious amounts of money to get the next issue of Charlie Hebdo to press, while Libération offered its offices to the editorial team. This strategy seems to be a success as the new issue of the satirical paper sold out as soon as it came out on Wednesday 14th January, leading to an immediate reprint of another million copies that will be published today.

While digital outlets enable the easy sharing of content and facilitate collaboration, real-time is one of online’s defining traits, which can be a curse as unverified information can spread like wildfire, leading to even more confusion and hindering the work of official organisations. Combining it with detailed features covering all the aspects of the story in the print editions enables the press to avoid misunderstandings in terms of figures, locations and names.

One of the teachings from the tragedy is that media specialists, whether the press or PRs, have a responsibility to ensure that facts and data are verified before spreading rumours. In the next few weeks, the French press will face trials and internal reviews to ensure that it learns from its mistakes. Until then, it is crucial for all media specialists to crosscheck references to avoid the blurred lines between facts and fiction while ensuring that each news source provides content that is suitable to its audiences.