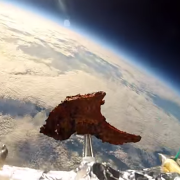 Have you ever seen a tandoori lamb chop fly to space? No? I didn’t think so. Neither had I until earlier this week when an incredibly bizarre video emerged from the depths of the Internet.  This video came about when a marketing team strapped a GoPro camera onto a tandoori lamb chop, attached it to an inflated weather balloon and launched it 31km into the stratosphere.

The balloon carrying the carnivorous cargo rose 325 meters per minute for 95 minutes before losing GPS contact when the balloon burst.  Novelist Nikesh Shukla and his team had planned the stunt to promote Shukla’s new novel, Meatspace. They had almost given up hope of the lamb chop ever returning to Earth, then 5 months later, a farmer discovered the Go Pro and lamb chop as he was harvesting his crops in Dorset.  Shukla was stunned at the 100 minutes of film captured by the GoPro as the lamb chop soared into space.  It’s beautiful, and if you don’t believe me, here’s the video:

This story struck a chord with me as it reiterates how far (literally) marketing and advertising campaigns have to go to make an impact.  No longer is a simple print or TV ad enough to draw in the eyes of consumers; now you have to be big, bold and viral.  Whether it’s a CGI Penguin, a Devil baby or a tandoori lamb chop flying into space, campaigns have to work harder than ever before.  So what’s the secret to viral success? Of course, campaigns need to work across multiple platforms and devices, have an innovative idea, some kind of consumer hook, but even that’s not enough.  It sounds utterly exhausting, but I’m beginning to believe that being virtually triumphant boils down to something much more simple, emotion.

Consumers are now connected 24/7 and have constant access to videos, adverts and social feeds. What we share and like have become an inherent part of our social presence and the choice to share a video or campaign becomes more of a social statement, a declaration that we care (whether hate or love) about the content. At its best, a successful campaign has the opportunity to unite, divide and above all drive brand conversations, creating not only a buzz about a product, but also have social resonance.  A quote from a New Republic article earlier this year sums it up, “Emotion is a big driver of what goes viral,” says Jonah Berger, a professor at Wharton and the author of Contagious: Why Things Catch On. “Whether something pulls on our heartstrings, makes us angry, or provokes controversy, the more we care, the more we share.” The decision to share a video can also “be driven by desire for self-authentication, in particular the desire to express one’s identity or express membership of a collective,”

So back to the lamb chop – you might hate, love or feel completely indifferent towards the video, but it does show that marketing teams will push every boundary to go viral and connect with its audiences.  The popularity of this video is only set to grow with each share and mention.  No matter how big a campaign may be, the power of its success ultimately lies with its audience.

ACCESS to Demonstrate Multiscreen Solutions for the Home, Car and Outdoors at...
Scroll to top