On August 1, 1981 MTV, the 24-hour video music channel, launched the first music video in history: “Video Killed the Radio Star” by The Buggles. On that day, the music video was born and the recording industry was changed forever. Pop, rock and other forms of music would never be just about the sounds again; the visuals became nearly as important – or sometimes more important – than what artists sang.

One afternoon in 1978, members of The Buggles wrote “Video Killed the Radio Star”. The song title itself is enough to give an idea of the main themes: worry and nostalgia. They felt “that an era was about to pass” – the passing of a period when bands and singers became famous through radio and the beginning of a time when it would be replaced by television. The lyrics refer to a period of technological transformation and to concerns regarding the changing media scene as 20th century inventions affected the creation of music.

When the video was launched on MTV, it only reached some 2.5 million cable subscribers in New Jersey but, from then on, it changed peoples’ perspective on what, how, where and when video should be watched. The music channel placed music video at the epicentre of people’s pop-culture experiences and eventually forced all music artists to accompany their latest release with images. The constant loop of the most popular videos in dorm rooms, dance clubs and bars presaged the age of anytime, anywhere video. MTV enabled television to become the medium through which people could enjoy the visual aspect of music and to become eventually the provider of numerous iconic moments in pop culture. 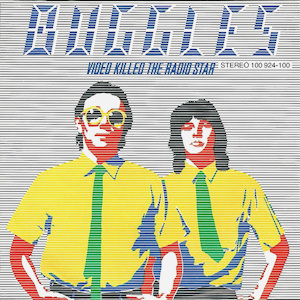