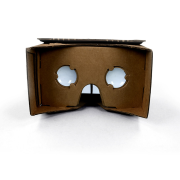 Google’s answer to Facebook’s recent acquisition of Oculus Rift and Sony’s E3 ‘Project Morpheus’ initiative raised a great deal of smiles at the company’s annual developer conference a few months ago, along with a fair few eyebrows. Both Sony and the Oculus Rift are blazing ahead in the market, striving towards a bright VR future by developing sleek and powerful virtual reality headsets that promise to deliver exciting new experiences to today’s demanding generation.

Google Cardboard was the tech giant’s cheap and cheerful foray into the market, which to an audience predominantly made up of discerning tech journalists and Google devotees, looked like a joke, or perhaps a good-humored swipe at Oculus. Attendees who may have been forgiven for expecting something more high tech in their goodie-bags as in previous years were instead provided with sheets of heavy duty cardboard with inset magnifying lenses and a set of instructions.

Despite its playful overtones, Google’s Cardboard was backed up by a serious and exciting premise. Once assembly was complete, attendees were able to download the companion Cardboard app, and insert their Android (of course) phones into the strategically placed slot at the front of the makeshift goggles. The app partitions the screen, one half for each eye, and once placed on the head, users were able to experience panoramic photos, Google Earth exploration and cinema-style video. Although this basic VR headset lacks the power of something like the Oculus Rift, which needs to be linked with a powerful PC, Google seems to be aiming at facilitating grass-roots developer access to virtual reality.

Although gaming is clearly the core market for virtual reality headsets, it will be fascinating to see the other applications that will become prevalent as the technology matures. Here at Platform, we talk about 4K UHDTV a lot, and it was, of course, a hot topic at IBC  – it clearly is the technology that will deliver the most immersive, cinematic viewing experiences to consumers. However, while watching the World Cup on an 80 inch 4K television would be certain to be a audiovisual tour-de-force, I’d be intrigued to view a sporting event through a VR headset, getting as close to the action as possible – I’m just not sure about how sociable it would be in comparison!

Virtual reality is one of tech’s most exciting frontiers, offering a totally immersive audiovisual experience to the viewer – the potential is huge. Although Google Cardboard isn’t launching commercially, and certainly wasn’t made to directly compete with its more high-tech relatives, consumers can find instructions online to build their own version. Google clearly wants to make the technology more accessible to a wider audience – it may just have the effect of bringing VR to the mainstream consciousness, showing how exciting the technology can be and how it can be about much more than simply immersive gaming.