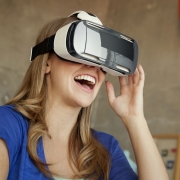 I’ve already discussed my love of immersive content in another Platform blog but I also have a fascination with displays. Asia has managed to combine both in a flurry of enticing content across the region. From the billboards in Hong Kong to video displayed in the MRT in Bangkok and the screens all around Seoul, video is an integral part of life in Eastern Asia.

This is why it’s no wonder that my personal favourite at this year’s IFA is leading Korean CE manufacturer Samsung. By launching the Samsung Gear VR, a virtual reality headset that is meant to rival Oculus Rift, the Korean manufacturer has shown once more its capacity to innovate in a market that is increasingly competitive. Working with the Samsung Galaxy Note, the new headset is immediately interoperable with Samsung’s phablet to enable consumers to enjoy 3D content, including movies, games, 360-degree video and more. It works with the Galaxy Note 4’s quad-HD display and can even convert 2D content into 3D enabling a true IMAX experience. While my interest would be piqued even further if it were compatible with the Galaxy smartphone series, it’s the first time that a virtual reality headset can be seamlessly combined with a second screen device.

The headset will open new doors for the gaming community, but could also become a new way for consumers to interact with their TV. For content owners, this provides ample opportunity to start planning the evolution of the second screen. Instead of using apps and quizzes on a smartphone or tablet, viewers could become part of the programme by projecting themselves into the content itself alongside participants. Taking it a bit further, this could also enable sports and music fans to feel as if they were physically in the venue, and I could finally be part of the cast of Mad Men (I’ll give Game of Thrones a pass, I’d rather not be a casualty).

The launch of this innovative new gadget also made me think of the potential in advertising. Although Asian ads are usually hard to translate and make little sense for Europeans, it will be incredibly exciting to see how creative Korean and Thai commercials will get once the Galaxy Gear VR becomes a fixture. It could even revolutionize in-game advertising.

While Samsung has demonstrated a clever strategy to increase the revenue it generates from its Galaxy Note series, broadcasters and advertisers can finally come up with truly immersive ways to utilize new gadgets as part of the TV viewing experience. Samsung is aiming at a $150 price tag for launch, which may sound fairly expensive for a gadget but the faster sales cycles mean that it will likely become affordable for the general public in a few months. It will be interesting to see when the content and the advertising industries make it part of their day-to-day multimedia creative offering – who knows, I could even become a Mad Woman!