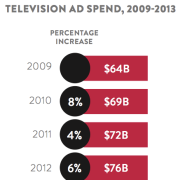 My last blog, “The passing of Peak TV value” looked at consumer value derived from each TV dollar spent and how it had probably peaked in the recent past.

It was interesting to see a couple of weeks later a blog by Peter Kafka for recode.net that looked at another imminent TV peak – in this case that of TV ad spend.

Peter’s evidence was a Nielsen report that highlighted slowing growth in total TV ad spend and the falling cost of a 30-second ad slot.

It’s reasonable to suggest that the two peaks are connected – if consumers are getting less value from TV it’s hardly likely that advertisers are going to increase their spend via the medium.

Peter went on to say: “the thing is, the Web has been looking at trends like these for years, and assuming that TV money would have to head their way. It still hasn’t happened.” And Peter’s got a damn good reason for this – people are still watching a lot of TV and that hasn’t peaked yet.

I believe that there’s more good news on the way for the broadcast industry – and it’s connected to the scale it delivers. Every advertiser wants to reach as many of its targets as it can – they want scale and targeting and they want them at the same time.

We’re beginning to see some really interesting developments combining the TV, second screen experiences, targeted audiences, tailored messages and the real-time automation of the ad selling, buying and delivery processes that deliver exactly what the marketers want – scale and targeting.

Sure the broadcast industry may need to share some revenues with new partners / old competitors, but by doing so it stands a great chance of ensuring the peak for TV total revenues continues to be some way in the future.

Advertisers spent the last couple weeks hearing from Web video sites that would like their money. Now they’ll spend a week hearing from the TV networks, where they dospend their money: Today is the beginning of the “upfront” presentations from the four broadcast networks, along with cable heavy-hitters like Univision and ESPN.

This is normally the time when someone points out that it’s ridiculous for advertisers to keep spending billions on TV, since the audience they’re trying to reach is going online, and in front of their phones. And that it’s even more ridiculous that TV ad spending keepsincreasing, even as the TV audience scatters.

All true, and it has been for years. It will continue to be so this year.

But three charts from Nielsen, released today as part of its annual “Advertising and Audiences Report,” show that we really might be reaching the peak of the TV era, ad-spending wise.

For starters, note that TV ad spending has continued to grow over the last five years. But that growth is getting slower and slower. It was down to three percent last year: 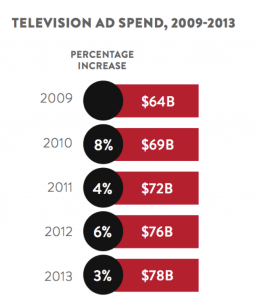 Meanwhile, the price for a 30-second ad has been shrinking for the five years. It’s down 12 percent since 2009.

So how do the networks react? By jamming more ads into every hour of TV. TV ad loads have increased by nearly a minute for broadcast TV since 2009, and even more for cable TV shows. 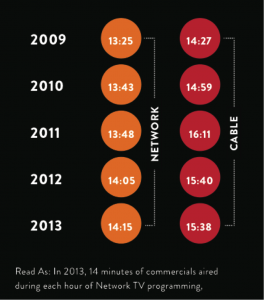 Slowing growth, shrinking pricing, pressure to create more inventory where there wasn’t any before. We know where this is headed, right?

The thing is, the Web has been looking at trends like these for years, and assuming that TV money would have to head their way. It still hasn’t happened.

One good reason is that people still watch an enormous amount of TV. More than ever, actually.

So the TV ad money isn’t going away overnight — this isn’t going to be the newspaper business. But it does look like we’re near the top of the ramp.