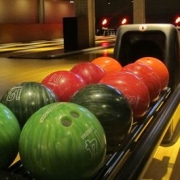 At Platform our mantra is work hard, play hard. So last Thursday, the team got together and headed to All Star Lanes for a well-deserved night out. The gloves came off, the bowling shoes came on, and our competitive sides came out.

As we took to the lanes, it became clear quite quickly who were the star bowlers, and who were the not-so lucky strikes. Amongst Emma’s elegant throw and James’ slick bowl, we had Sego’s lob, Paul’s robotic arm and David’s dash and fall.

But we had to recognise the players who truly shone out on the night, and we issued Platform trophies for the winning team, the best individual bowler, the most “stylish” bowler, and the man of the match. Although it was a close call, it was Gay’s team that reigned supreme, James “two trophies” Michael who won best bowler and man of the match, and Rajin that was awarded most “stylish” bowler (which she is taking to mean best dressed, not worst bowler).

Followed by dinner and drinks, the team had a great night out. Now that we have unleashed our competitive sides, we are all geared up for our next team do. Let the games commence…