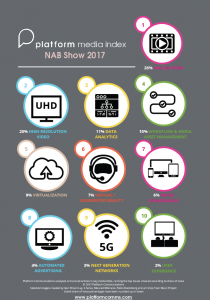 The broadcast and video industry loves the big event – so when the world’s largest media, entertainment and technology exhibition took place at the end of April in Las Vegas, it’s little wonder 103,000 industry players converged for NAB Show 2017. And Platform Communications was there in the thick of things, helping its 13 clients attending make the most of their opportunities at the show.

But Platform was also there to take the measure – literally – of the big topics dominating the conversation at what many attendees now see as the buzziest NAB Show in a few years. Back in our London headquarters, Platform mission control not only supported staff on the ground at NAB, but also launched Platform Media Index NAB Show 2017 – tracking what’s hot and what’s not in the media coverage of the global media event.

The Platform Media Index (PMI) was first introduced at Mobile World Congress (MWC) earlier in the year, when we monitored the key topics being covered in the press during and around the show. NAB presented the next major opportunity to gauge and shine a spotlight on the biggest stories emerging in the industry this year.

The results for NAB showed ‘online video’ and ‘high resolution video’, both major drivers of change in the industry, dominated the show coverage with a combined 48% share of voice. ‘Online video’ topped the ranking with a 28% share of voice, due to widespread coverage of the many new technologies transforming over-the-top TV, video on demand and live streaming in a multiscreen, multidevice marketplace.

Other topics that were largely discussed in the context with ‘online video’ included ‘data analytics’, ‘media convergence’, ‘virtualization’ and the second most popular topic, ‘high resolution video’ – which had been ranked number 10 in the Mobile World Congress PMI. ‘ Helping ‘high resolution video’, which encompassed stories about 4K/UHD, 8K and HDR, rocket up the coverage rankings to number two – with a 20% share of voice – was the story of the first 4K UHD transmission from space, when NASA astronaut Peggy Whitson was interviewed from the International Space Station.

‘Data analytics’ was the number three topic, up from number five in the MWC index, while ‘workflow and media asset management’ and ‘virtualization’ were numbers four and five in the index. One of the hotter topics at MWC, ‘virtual/augmented reality’, dropped in the index rankings at NAB from fourth to sixth despite strong coverage of the popular Blue Man Group featuring in a 360-degree immersive virtual reality demo.

The most popular topic at Mobile World Congress, ‘next generation networks’, placed ninth in the NAB rankings as, while not the overpowering focus of discussion and debate it was at MWC, connectivity was still an issue addressed in the coverage.

And now onward to IBC, the next big stop for the Platform Media Index and a chance to take the measure of the talk of the town in Amsterdam this September. 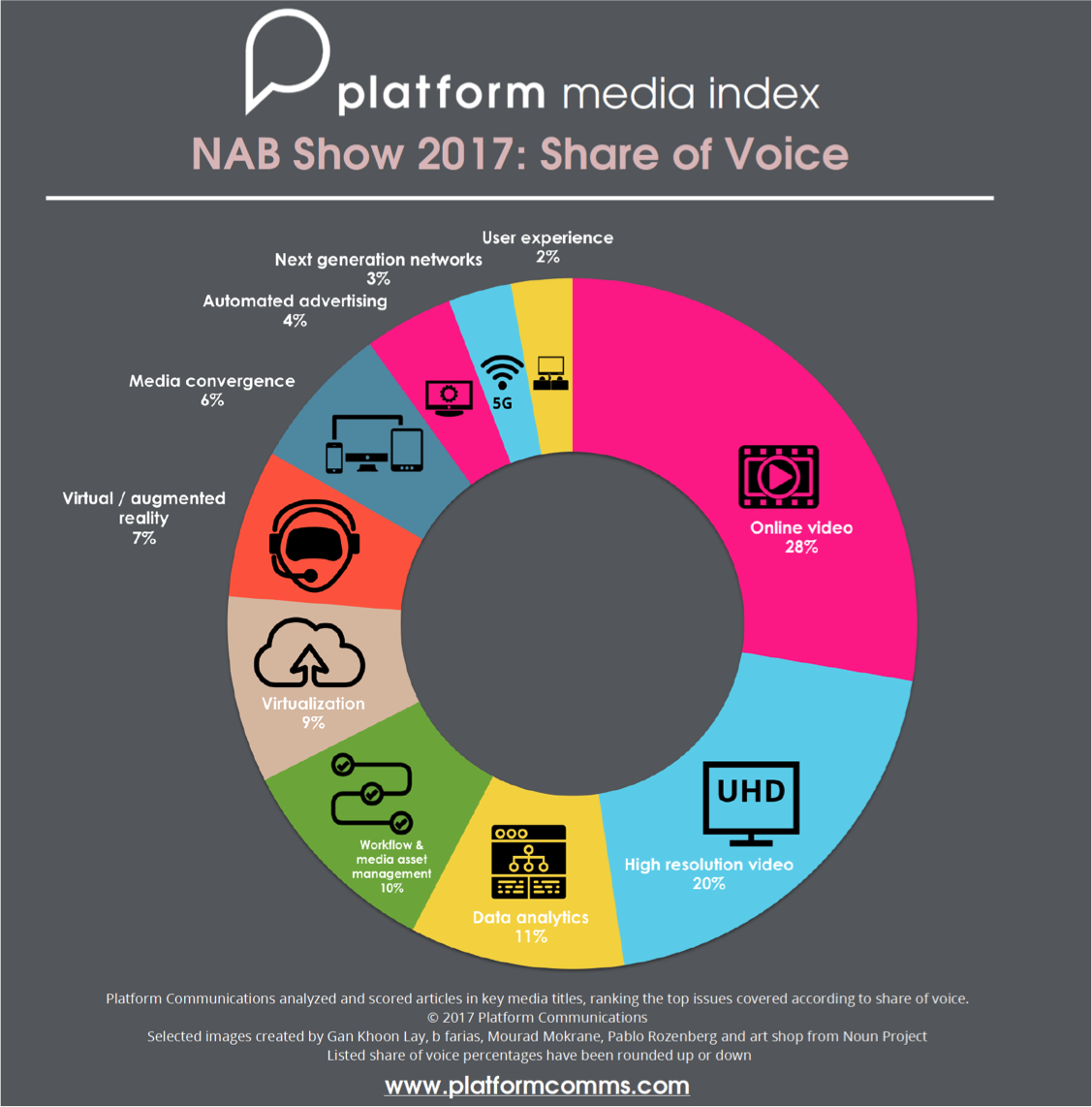 How we do it

Compiling the Platform Media Index involves methodically monitoring the news as it’s published, recording and scoring coverage across a broad range of key media outlets – for NAB, that meant in 40 bellwether titles between April 21 and May 3.

The scoring system reflects the depth of the discussion on each issue, incorporating a scaled approach: giving greater weight to articles wholly about a topic, medium scores to stories that provide substantial discussion of a subject but only as part of a wider ranging article, and the lowest grades to topics addressed only in passing or briefly.

The infographic can be downloaded here.