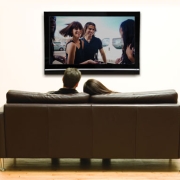 Over the years, TV has had its fair share of bad press. I’ve seen health warning about the dangerous levels of sedentary activity it encourages and read many fear-mongering articles about rising hours spent watching TV each day. Just this month the Guardian cited research claiming that watching TV “speeds up the hedonic treadmill” and makes it harder to derive satisfaction from our incomes and associated lifestyles.

The rise in reality TV programmes and channels that show endless repeats adds fuel to the view that we’re squandering our time; investing energy into cheap-to-produce shows which require minimal imagination or brainpower. Even the recently coined term ‘binge viewing’ carries negative connotations of excess and uncontrolled indulgence.

Cinema on the other hand has long been regarded as an elevated art form, associated with thoughtful and beautiful productions, and peppered with meaning which enhances our cultural education. While it’s hard to defend TV in some respects, I feel that many virtues of television have often been overlooked and that actually, from a psychological perspective, watching TV can actually enhance our lives in a variety of ways.

While it’s hard to defend TV in some respects, I feel that many virtues of television have often been overlooked and that actually, from a psychological perspective, watching TV can actually enhance our lives in a variety of ways.

Far from the idea that watching TV is an antisocial pastime that keeps people inside, TV clearly functions as a powerful social lubricant; discovering a favourite programme in common with someone is an effective icebreaker and reliable conversation-starter. TV can also help us relate to others as we become emotionally invested in the characters portrayed, making us generally more compassionate as people.

And to address the criticism that TV can encourage unhealthy aspirations, presumably because watching characters with envious lifestyles can make us feel less satisfied with our own, I’d point out the countless shows created (many of the best) which centre around those with hard existences, and therefore offer opportunities for ‘downward social comparison’ which research shows can evoke positive emotions.

In addition to the psychological benefits, we have also seen a profound change in the quality of television programmes in recent years, driven by greater competition in the TV industry and the rise of internet TV services. You only have to look at Netflix to understand that exclusive, original and desirable content has become so important to business growth.

The rise of internet TV players is also responsible for modern binge viewing culture, which in turn has influenced scriptwriters to invest in long form storytelling and improve character development to a degree which a 2-3 hour film can never match. With better characters we’re seeing better storytelling, and ultimately more complex and rewarding plots starting to unfold on our screens.

It’s evident that industry change is doing good things to TV, and TV is doing many good things to us, and consequently there’s no better time than now to challenge the perception of the idle couch potato.

From shadows to penguins: The life of the John Lewis Christmas ad
Scroll to top