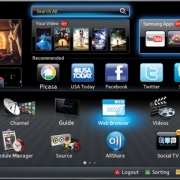 I’m trying to remember the last time I solely watched television, without being half absorbed in a different screen or feed, but I can’t. It seems that I, like many others (79% of those surveyed in a recent NATPE study admitted they use a device while watching TV) have managed to adopt second screening without even a hint of transition. It just feels natural.

In a world where we are all hectically trying to juggle multiple mundane tasks, multi-screening makes sense and offers an alternate online world. Whether used as a platform to dissect and devour television content or as a way to source new series or TV trends, the adoption of a second screen has increased how engaged we are in the content we watch and social TV is at the forefront of this change. In 2010 the Massachusetts Institute of Technology identified Social TV as one of the top 10 technologies that would change life as we know it; 4 years later, there has been clear evidence to suggest that the harmonious matrimony of social media and television is here to stay. Most of us have accepted social media as part of our daily landscape, launching “selfies” to every site or app possible, but seeing how brands are adapting to this changing pattern of interest is compelling.

The introduction of multiple screens means that engagement with a product or brand through traditional advertising is more difficult to predict. Long gone are the days where families would all be watching the same singular device, so the adoption of social TV is essential for success in the sea of social change. Interestingly, between August and October of 2013, Social Guide found that 5.5 million people tweeted about brands and TV; 74% tweeted about consumer electronics, 48% about restaurant brands and 24% about car brands. This paves the way for advertisers to combine their primary screen content with the second screen by forming partnerships with second screen apps to act as a connector to new customers. Soon, advertising expenditure will reflect these changes too; Nielsen predicts that by 2016, 50% of all broadcast budgets will be spent on multiscreen advertising as opposed to 20% today. The combination of multiple screens and social media is a revolutionary advertising opportunity. By targeting their customers through social streams, brands will become increasingly accessible and engaging.