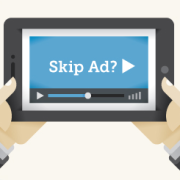 Interactive video advertising has become a powerful marketing tool for companies looking to increase brand engagement. With the growing global adoption of connected devices, including Smart TVs, it is clear the Internet is playing a much larger role in the way we watch TV. With just a swipe of your iPad, flick of the remote, voice command, or tweet, it is now easier than ever to take action, as a result, of seeing an ad.

As brands look to create a deeper engagement between the viewer and the content, monitoring engagement is becoming increasingly important in creating personalised, compelling and interactive TV experiences. However, it is often debated in the industry whether an increase in interactivity also distracts viewers, by providing an overwhelming amount of features or information. How many times have you seen a great ad, but not been able to recall the brand?

Recent research from smartclip revealed that Smart TV advertising, combined with ads on traditional TV, was found to increase viewer interaction with content; with half of the study’s users announcing they have already interacted with a Smart TV ad. For advertisers, Smart TV appears to be an extremely effective platform for engaging viewers. Yet, traditional TV is losing users as consumers look for more connected ‘TV Everywhere’ viewing experiences.

Today, apps are quickly replacing TV channels and many of the world’s leading linear TV networks, such as BBC, ESPN and HBO are already moving into Internet TV. By creating interactive and incentive driven campaigns for Smart TV, video advertising can effectively merge with traditional broadcast TV, rather than replace it. Thanks to the introduction of catch-up TV services such as ITV player and 4oD, it is possible to watch more of the content you want to watch, and notably easier for companies to target viewers with ads relevant to the content they are watching. Within an interactive ad such as a film trailer, a viewer might have the option to watch additional previews or buy tickets.

Many big brands nowadays are also utilizing social media to learn how to engage more deeply with their audiences. For example, Facebook announced in June it had been researching which of its 1.3 billion users tend to view more video, and which skip over content without watching. By analysing our viewing habits, Facebook can seek out the content people are most likely to engage with, and thus provide people who watch video with more highly relevant content. By fine-tuning the news-feed, Facebook can also find out which users are more receptive to video ads as opposed to image-based ads.

For companies looking to engage with customers, time can be another limiting factor. Consider how long you would spend scrolling through a Facebook post or photo on Instagram? With Twitter’s 140-character limit, it’s not a surprise our attention spans are waning.In comparison, video content provides brands with ten times the viewing time, and companies are progressively looking to capitalize on short-form video advertising through apps such as Vine, and Instagram, over traditional television commercials.

Following its acquisition of Instagram a few years ago, Facebook recently introduced ads to users’ news-feeds.  In other words: brands can now post ads as content. Prior to this, brands could only use the platform to push photos and videos to the people who chose to follow their accounts. However, by allowing users to hide ads they don’t like and provide feedback, Instagram can focus on offering users rich content that is both targeted and relevant.

While the future of digital video is multi-screen, ultimately the future of online advertising will be determined by how the VoD market and consumer behaviours develop. As companies rapidly move towards being able to effectively reach consumers across all screens, we can expect to see advertisers capitalising on viewers in even more creative ways. For instance, brands in the UK will soon be able to create unique interactive video experiences for users through Google Glass, which was launched in the UK in June.

As an example, see what it’s like to ride, run, and roll around London with Google Glass, through a cool short-form video from the brand below: