London, June 19, 2014 – SyncScreen™, innovators in the creation and delivery of harmonised two-screen TV experiences, has partnered with Civolution, the leading provider of technology and solutions for identifying, managing and monetizing media content, to deploy its Automatic Content Recognition (ACR) technology, SyncNow, at the core of the company’s proprietary synchronisation engine, the SyncScreen™ Framework for the first ever play-along quiz app for CBBC’s (the BBC’s dedicated children channel) Gory Games.

Designed to be used with the ever-popular Horrible Histories spin-off quiz show Gory Games, the app for iOS and Android tablets and smartphones lets children take on the studio contestants, test their knowledge of gruesome facts and win virtual prizes whilst watching the show live, or on-demand on BBC iPlayer.

The first app powered by the SyncScreen™ Framework, also using Civolution’s SyncNow ACR technology, was for the CBBC series Ludus and involved synchronising more traditional app mini-games to the studio game show. The attendant play-along app was designed by Cube Interactive using the SyncScreen™ API and was launched in January 2014.

“We wanted to create the optimal play along experience for Gory Games, using all our editorial know-how and design insight to produce a fun,  immersive and sympathetic two-screen TV experience for children ” said Marc Goodchild, Creative Director of SyncScreen. “We feel that we have achieved that. Crucially, from a creative and production process perspective, our SyncScreen Framework made the synchronisation functions easy to implement and we have used Civolution’s SyncNow watermarking solution as the underlying enabling tech for frame-accurate cue detection to maximum effect”.

“We are delighted to be working with SyncScreen to deliver this great synchronized app. We are confident that such projects will help create stronger relationships with younger audiences, who as ‘digital natives’ will naturally want to play along with a well-designed app that’s fun and easy to follow.” said Andy Nobbs, CMO, Civolution. “Synchronization between multiple screens is becoming increasingly prevalent in mainstream TV programming. The launch of the Gory Games app is further proof that a well designed and produced two-screen experience can unlock deeper viewer engagement models.” 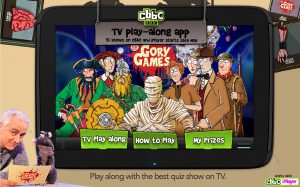 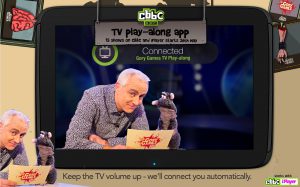