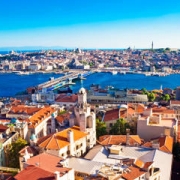 Back in late June I was sitting in an Istanbul apartment, soaking up the summer morning sunshine which was streaming through the living room window, armed with a cup of coffee and looking desperately for something to watch on television – all while waiting for the bathroom to become unoccupied.

And the content choice was sparse. Aside from BBC World (which, as any seasoned British traveller knows, is a very poor relation in the BBC News family), I simply couldn’t find anything to watch outside of a plethora of international news channels, local Turkish game shows and a rather dated – and creepy looking – kids’ puppet show.  At least I think it was aimed at kids.

I then attempted to use my Netflix account on the iPad, only for Turkey’s content regulations/restrictions to veto that option too. So much for TV Everywhere. It was enough to make you think that Turkish TV was stuck a decade behind the times.

The fact is, however, it’s not. A February 2013 report from Discovery Networks, ‘The Rise of the Television Everywhere Audience’, found second screen penetration is growing rapidly in Turkey. Around a third of tablet owners in Turkey (34%) watched live TV on their tablets- this compares favorably to the Central Eastern Europe, Middle East and Africa (CEEMEA) average of 25%.

TV viewers worldwide have never had it so good. In fact, despite that irritating early summer morning, I’ve also found it easy (in general) to find decent, accessible content since registering my account around Christmas time last year.

As consumers, we can now enjoy greater access to content than ever before, at any time we want, and generally, any location. Immediacy is the key. iTunes and later Spotify have demonstrated this through their success in turning the music industry upside down and making music easier to locate, buy, download, transport and listen to.

Consumers are not looking for the same kind of experience throughout the day- we are looking for tailored content, suited to the situation we find ourselves in. For instance, that morning I was looking for any kind of mildly engaging content which was a) in English, b) light-hearted enough to not require a large amount of focus (thanks to a particularly late evening the night before), and c) available to watch on my journey towards the Blue Mosque that afternoon. In other words, a fixed television schedule was the last thing I wanted. Video was needed very much on-demand and convenience was paramount.

Nevertheless, there a number challenges in delivering a genuine TV Everywhere experience. Broadcasting rights are a major challenge, broadcast spectrum debates continue to wage on, while for the consumer, the complexity of accessing content on different devices means that the viewing experience is often disjointed and varies widely in terms of quality. In short, it requires more effort, particularly in terms of connectivity, it’s a less passive experience and for me, at least, it’s still not quite as pleasurable as watching television on the main screen TV.

But maybe I shouldn’t complain too much. At university my Beko TV used to travel with me from house to house, each time taking up a disproportionate amount of table space in the process. Today, I don’t need one at all. The speed of change has been astonishing. Television on mobile phones only arrived in the UK during my first year at uni (2006), while the iPad only came into existence in 2010. As one of my old university friends posted recently:

And when you think about it – that is pretty incredible. Not that you could have convinced me of that in Istanbul that particular morning.