Research from TVT Media, the new global content services powerhouse, shows the UK is at the epicentre of the explosion in over-the-top (OTT) video on demand (VOD) services across the European Union and Turkey, as 82 of its 226 OTT platforms – double any other EU nation – are VOD services targeted outside the UK. The research, commissioned by TVT Media and conducted by Media Asset Capital, also reveals that the Netherlands is rising fast as the second major OTT VOD export centre, with Luxembourg, France, Sweden and Germany also strongly supporting cross-border digital TV services.

In the second part of its European Media Maps series, TVT was able to map OTT VOD hotspots across Europe, based on its comprehensive database of OTT platforms such as BBC iPlayer, Netflix, Amazon Prime, Discovery Channel (catch-up) and Dreamworks’ AwesomenessTV. The map also reveals which nations are emerging as major pan-European OTT VOD hubs, as the research shows close to a quarter (23%) of OTT platforms (153 out or 673) are VOD services targeted outside their country of origin.

Ian Brotherston, Chief Executive of TVT Media, comments: “The research highlights the fact that Europe’s growing number of multi-device, multiscreen, multiservice consumers want more on-demand content, along with new ways to access it – and that the industry is responding well to these demands. It is also very clear that OTT is the driver behind VOD growth, but its development is still closely tied to high-speed broadband availability and the infrastructure of pioneering internet markets – reflected by the fact the UK and Netherlands have proven so adept at attracting OTT service providers.”

Brotherston adds: “What is evident is that OTT is a major disruptive force that is changing the way service providers view their operations. The need to be physically located in a particular country is no longer a fundamental requirement. The internet has released content from geographic constraints and the future is likely to see more broadcasters, studios and other content owners following the model of leading innovators by delivering services via multinational platforms.”

The research demonstrates that the UK, and London in particular, has solidified its position as a global media centre with its emergence as the leading European OTT hub, with 215 specific VOD services – close to 40% targeted abroad. Amazon Instant Video and parts of the Sony group, both have more than 30 UK-based OTT VOD services going to mainland Europe through a single licensed platform each – counting as just two of the 82 UK exporting platforms. Similarly, Discovery Communications Europe, Modern Times Group, Walt Disney Company and Playboy TV all have over 10 OTT services targeting various EU countries but originating from a single platform in the UK.

Perhaps the biggest revelation from the research is that the Netherlands – with Amsterdam leading the way – is beginning to rival the UK as the main European OTT VOD export hub. Although the Netherlands is nominally listed as home to 51 OTT platforms, with 18 targeting external markets, this figure includes the European base for Netflix, which serves as a hub for 37 separate platforms across the region. In addition, the Netherlands is home to Modern Times Group’s ‘Zoom’ OTT services, which target 17 countries across Europe, and a regional centre for Liberty Global Services’ UPC and Virgin Media brands. These platforms are registered as single entities, yet if each of the constituent services were counted individually, the Netherlands would approach the UK as the largest exporter of OTT with more than 70 platforms. 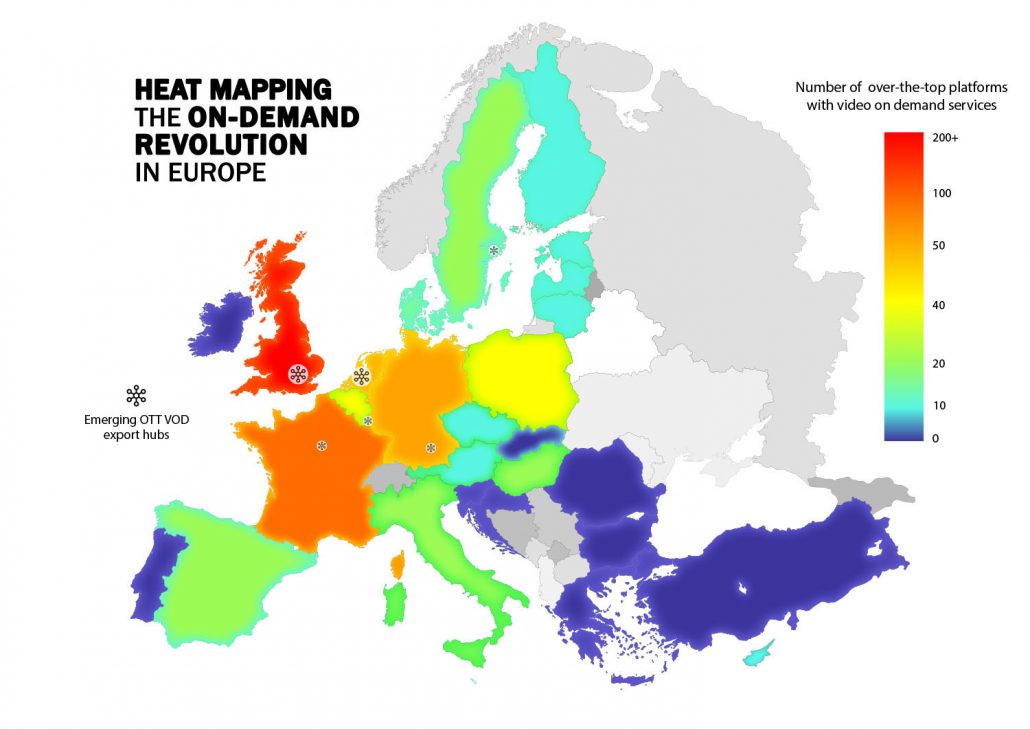 Key findings on the OTT VOD market across Europe also include:

The European Media Map series highlights critical information on broadcast languages, content genres, video on demand services, online platforms and other elements of the TV market in all 28 EU countries and Turkey, which have a population footprint of 600 million. The series grew out of the capture of in-depth data on licensed broadcasters and video platforms across Europe, commissioned by TVT Media and compiled by Media Asset Capital – with the aim of building an unrivalled understanding of on-going developments in the European broadcast and on-demand media market.

To talk to TVT about how to navigate the complexities of the evolving European media marketplace, please go to www.tvt.biz or www.digitalmediacentre.com or email us at hello@tvt.biz.

TVT is deploying next-generation IP cloud technologies and leading-edge media management approaches that enable it to address the complexities of packaging, versioning, managing and delivering content for the dynamic international linear, on-demand and online entertainment market.

Headquartered in London, with operations in Amsterdam, Tokyo, Singapore and Sydney – and a dedicated software development centre in Krakow – TVT is built on an ethos centred on customer excellence and innovation. From A+E Networks and Discovery Communications, to the BBC and Fox Networks Group, to Netflix and Sony Pictures, TVT is trusted by the industry’s biggest names to enrich and manage tens of thousands of hours of content, serving millions of viewers every day.