News
You are here: Home1 / News2 / Platform News & Views3 / The Platform Media Index: what were the hot topics at Mobile World Con... 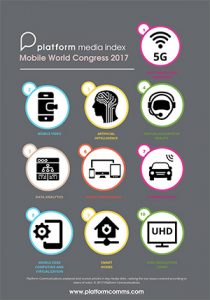 Like anyone tracking the latest trends and developments in the media and technology world, we at Platform spend a lot of time keeping a close eye on what people are talking about any time a huge industry event takes place – and by that I mean looking at what’s hot and what’s not in the media coverage.

But when more than 100,000 players in the global mobile, telecoms and communications technology industry converged on Barcelona last week for Mobile World Congress (MWC), we decided that instead of just casually scrolling through all the news as it hit the internet, we would formally monitor and record all the coverage of critical industry issues across a broad range of key media titles. Then we could share the results with clients, partners and media.

And so the first Platform Media Index was born!

Everyone throughout the agency took on a number of bellwether media titles – covering mobile, telecoms, broadcast, video, marketing, digital technology and general business – and diligently analyzed every piece written on MWC, scoring the issues discussed in each article. In the process, we analyzed coverage in more than 30 titles, going thorough close to 300 stories.

The scoring system reflected the depth of the discussion on each issue by incorporating a scaled approach. Greater weighting was given to articles that were wholly about a topic, with high scores assigned to pieces that gave a detailed look at an issue throughout. Medium scores were given to stories that provided substantial discussion on a topic, but only as part of a wider ranging article or as a significant element in a take-out on another issue given more prominence. Least weight was attributed to a topic when it was addressed only in passing or briefly as a point in a wider discussion.

Far and away the big winner in the hot topic sweepstakes was ‘next generation networks’, as senior executives from Nokia, Huawei, Ericsson, Deutsche Telekom, AT&T, SoftBank and Vodafone were among the many major players at MWC that pointed to 5G as the future of mobile in media coverage of the event. Most other topics among the top 10 that garnered media attention, including ‘mobile video’, ‘artificial intelligence’, ‘virtual/augmented reality’, ‘high resolution video’, ‘media convergence’ and ‘mobile edge computing and virtualization’, were largely discussed in context with 5G.

Helping push ‘mobile video’ – which encompassed coverage of streaming, over-the-top TV, video on demand and short web-based content – into the number two spot was the keynote by Netflix CEO Reed Hastings, which proved to be a big hit across all titles. ‘Connected cars’ got some splashy coverage on the back of the unveiling of the Roborace driverless racecar. Other Internet of Things focused discussion centered on ‘smart homes’, while ‘data analytics’ received prominent coverage in titles that regularly write about Big Data but not across the board.

For the full ranking download the infographic here, and for a breakdown of each topic’s ‘share of voice’, see below. 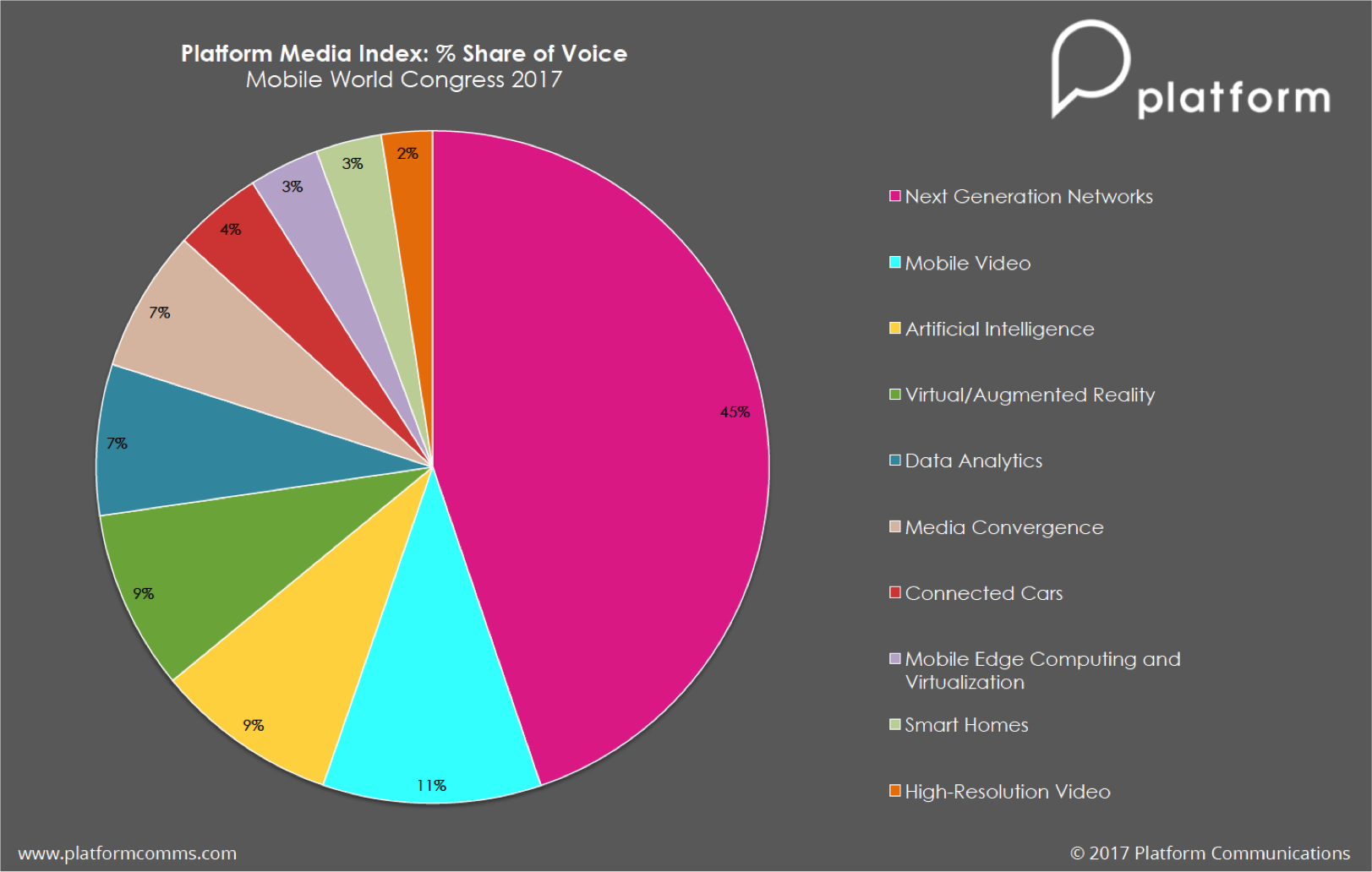