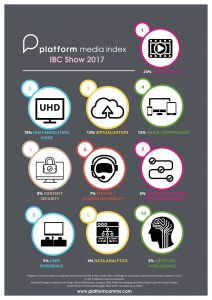 The Index provides a snapshot of leading media technology trends, the moves being made by key players, and the discussions people in the industry are having during major events. The top five topics at IBC were ‘Online Video’ (24% share of voice), ‘High Resolution Video’ (18%), ‘Virtualization’ (13%), ‘Media Convergence’ (12%) and ‘Content Security’ (8%). All told, these five categories accounted for 75% of all the IBC coverage tracked before, during and after the conference and exhibition, which took place in Amsterdam, September 14-19.

Gay Bell, Chief Executive, Platform Communications, says: “The Platform Media Index offers an important indicator of how industry trends have evolved during the year – most recently between NAB and IBC. The IBC coverage demonstrates how consumer demand is now driving major change both in the growth of online video and the expansion of streamed OTT services.”

She adds: “As the industry undergoes a period of enormous transformation, the impact of enabling technologies – particularly cloud and IP – will prove decisive. These technologies, along with a collective desire to come to a consensus over the standardization of new protocols and infrastructure, will ultimately determine the speed at which this sector will evolve in the coming years.”

While the top two categories remained unchanged from the Platform Media Index for NAB Show 2017, the IBC analysis shows ‘Data Analytics’ and ‘Workflow and Media Asset Management’ falling from third and fourth place to ninth and seventh place respectively. The topic of ‘Virtualization’ rose from fifth to third, while ‘Media Convergence’ doubled its media share of voice from NAB Show to advance from seventh to fourth.

Video piracy came to the fore at IBC 2017, just two months after the release of the seventh season of the world’s most pirated TV series, Game of Thrones. ‘Content Security’ emerged as the biggest mover in the latest Platform Media Index, with the topic increasing its total share of voice from just 1% (13th place) at NAB Show to 8% (fifth place) at IBC. Key coverage in this category was bolstered by stories on Ericsson, NexGuard, NAGRA and Verimatrix.

Capturing close to one in four stories in the Index, ‘Online Video’ was clearly the standout story on the Amsterdam showfloor this year. The news agenda was driven by the growth of pay-TV via over-the-top (OTT) services and moves by many industry players to prepare for what they now see as an inevitable shift to an all-IP future. A number of key players also released announcements relating to Android TV, including Arris, Amino and SPB TV, with Videonet’s John Moulding describing the trend as “a game-changer, allowing TV companies to own the television user interface and have their service as the default view for customers”.

The wave of Android TV announcements also boosted coverage in the ‘Media Convergence’ category, underlining the increasing efforts by operators to find new ways to build relationships with millennials and other consumers looking for anytime, anywhere offerings across multiple devices and screens.

A flurry of new Ultra High Definition (UHD) innovations helped to drive media interest in the area of ‘High Resolution Video’. This was in part fueled by the Ultra HD Forum’s operator survey insights into the technologies required for the next generation of entertainment based on UHD standards.

The fact that ‘Virtualization’ emerged as the third most reported category of IBC coverage highlights the on-going shift in the market towards a more cloud-based and software-centric worldview. Industry leaders such as Cisco, Ericsson, Imagine Communications, Kaltura and TVT/DMC all made major announcements that gained widespread media coverage during the show. 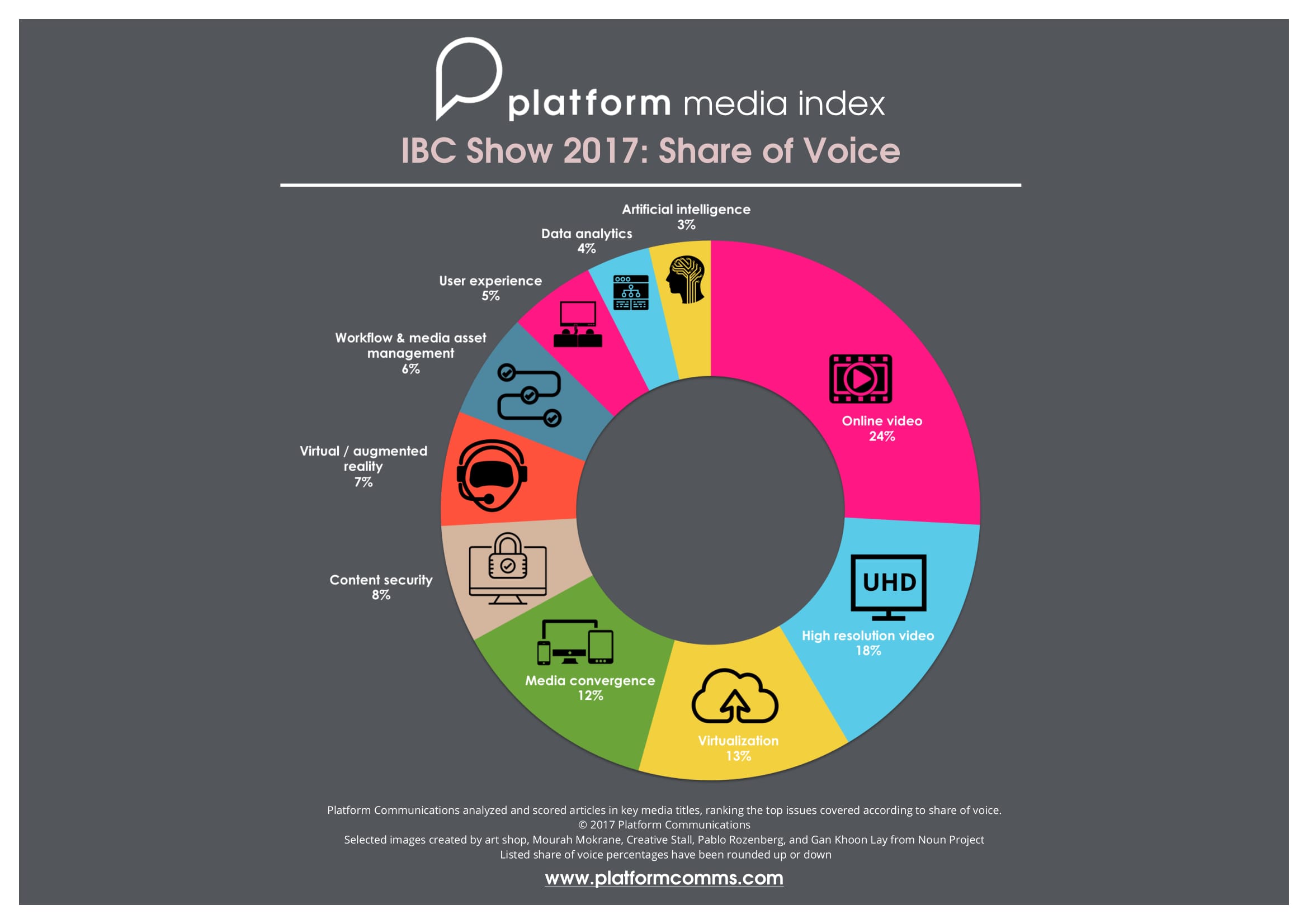 The Platform Media Index is designed to assess the main drivers of conversation and trends being highlighted in 40 key European and global media titles covering major industry events. The research for the most recent Index was conducted from September 1 through to September 25, 2017. IBC 2017 took place in Amsterdam, September 14-19.

Platform is the media and technology communications expert. We design and execute global communications programmes, using a blend of industry expertise and audience insight to engage consumer, trade and business audiences. As award-winning specialists, we use our deep understanding of the crossover between media, entertainment and technology to fuel strategic consultancy, message building and thought leadership activities across a range of communication channels.

Our knowledge is the result of 25 years’ working as communications professionals and content creators in TV, music, games, consumer electronics and beyond.

The AI driven singularity: How is AI impacting the job market?
Scroll to top