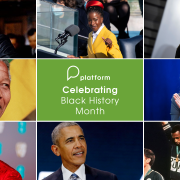 A picture speaks a thousand words, and a moving one makes an even bigger impact with the power to bring about social change. As the late American journalist and political commentator Howard K. Smith said in an interview in 1997, television was a decisive factor in the success of the Civil Rights Movement, along with “the wonderful eloquence of Dr Martin Luther King”. His documentary for CBS, Who Speaks for Birmingham? which highlighted racial tensions and the attacks on the Freedom Riders in Birmingham, AL in 1961, is considered a seminal moment in American television history.

On August 28, 1963, during the March on Washington for Jobs and Freedom, Dr Martin Luther King, Jnr.’s impassioned speech, with the unforgettable words, “I have a dream that my four little children will one day live in a nation where they will not be judged by the colour of their skin but by the content of their character,” led the Kennedy administration to advance civil rights legislation. That moment was televised to an audience of millions.

Today, these words remain the guiding principle behind the global movement for equality and civil rights. As we mark Black History Month, we asked the Platform team to choose iconic screen moments in black history that inspired them.

We begin with the 1936 Olympics in Berlin – the first to be captured on film and viewed by an international audience. Although his decision to take part drew criticism from the American civil rights organisation, the NAACP, Jesse Owens was the undisputed star of the American Olympic team. His four gold medals and images of him on the podium will always stand out as a blow to the ideals of Nazism.

Over three decades later, the 1968 Olympic games in Mexico City marked the first televised instance of protest on the sporting field. In what became an iconic image, just months after the assassination of Dr Martin Luther King, Jnr., two American athletes Tommie Smith and John Carlos, each raised a black-gloved fist during the playing of the US national anthem. 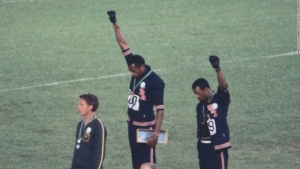 A continent away, on February 11, 1990 the fight against Apartheid in South Africa experienced a major shift with Nelson Mandela’s release following 27 years in prison. Later that day, Mandela delivered his famous speech from Cape Town’s City Hall, where his words, “My friends, comrades and fellow South Africans, I greet you all in the name of peace, democracy and freedom for all,” heard in-person, through TV screens or over the radio, marked a turning point in South Africa’s history.

Fast forward to 2009 and Barak Obama, the first black president of the United States of America, giving his inaugural address in front of a record-breaking crowd for an event held in Washington D.C. and, in his own words, “all the other peoples and governments who are watching today, from the grandest capitals to the smallest village where my father was born.”

Two years later these words were echoed by civil rights activist Rev Al Sharpton, delivering the eulogy at the funeral of George Floyd. His phrase “get your knee off our necks” became a rallying cry for the Black Lives Matter (BLM) movement around the globe.

At a BLM rally in London in May 2020, actor John Boyega’s impassioned words rang out from screens around the world: “Black lives have always mattered,” Boyega told his fellow demonstrators. “We have always been important. We have always meant something. We have always succeeded regardless. And now is the time. I ain’t waiting.”

They seemed almost prophetic as just six months later, Kamala Harris made history as the first woman – and the first woman of black heritage – to be elected Vice President of the United States of America. In her speech marking the occasion, she honoured “the generations of women, Black women — Asian, white, Latina, Native American women who surround our nation — who throughout our nation’s history have paved the way for this moment tonight” adding “while I may be the first woman in this office, I will not be the last.”

While the impact of TV and ability of the scenes above to alter perceptions is undeniable, there is still work to be done and the media industry is still working towards equality. A recent Creative Diversity Network (CDN) report revealed that the representation of Black, Asian, and minority ethnic people in the British media went backwards both on- and off-screen.

The diverse casting of Bridgerton, Netflix’s hugely popular period drama with a twist,  offers a ray of hope for the future of equality on our screens. Just as the events in Birmingham, Dr Martin Luther King Jnr.’s speech and a majority black cast in Black Panther has begun to shift perceptions. It shows that the images we see on our screens today – whether those in our living rooms or the ones we carry in our pockets – can move the political needle and be the catalyst for further social change.