Netflix’s subscriber wobble in the past couple of quarters saw plenty of hysterical headlines about the end of ‘peak streaming’ and the possible knock-on effects on the wider TV and content industry. But for those who were paying attention, among its strategic plans, Netflix talked about a ‘slow down in the rate of growth’ of its content spend, rather than a reduction, and that’s in a global content industry that Ampere figures show has seen a 100% increase in spend over the last decade to reach $223bn by the end of 2021.

Netflix aside, others, including the major US studio groups and broadcasters, continue to fuel the world’s content boom. And content creation needs tech; from image capture to on-set facilities to editing, transport, storage and playout and the plethora of stages in between. That means the global content boom is a tech boon. These are the key content trends all tech companies need to be scaling for…and innovating for:

Competitive pressures as well as the creation of truly global direct-to-consumer content offers means money that would previously have been hyper-concentrated in the US is spreading around the world. Ampere data shows that more than half of upcoming Netflix shows are being made outside the USA, and across the wider group of global streamers, 40% of all their upcoming first run TV shows are being produced in languages other than English. These are original productions, designed to serve a global rather than a local audience, and that means localization services are red hot. While English and Spanish are the biggest focus for streamers, Ampere data shows the current production slates of the seven global streamers include content creation in 30 different languages. 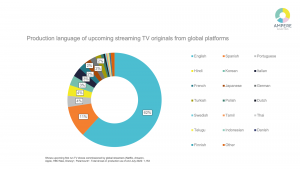 The spread of production means a facilities and tech talent crunch

Hollywood was built around sound stages and studio facilities but even that world centre of movie production is struggling to keep up with demand for facilities and tech talent. That shortage is now spreading across the globe as production locations diversify, leading to a studio building boom in countries like the UK.  Ampere data shows where that crunch is hitting hardest. While the US remains the largest production market globally, China is already at significant scale and the UK has grown to the point that it may be about to overtake China as the world’s number two production hub. Our chart shows who could be next. 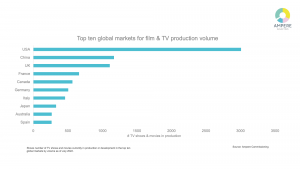 Netflix took the world by surprise in the first quarter when it revealed plans to launch an ad-supported tier. Since then, a global partnership with Microsoft for ad tech has been agreed. But as the dust settled and analysts stopped to think through the move, it became clear that Netflix’s jump was inevitable. In fact, now that Netflix has made the decision to embrace advertising, Apple stands at the only global streamer to not have a hybrid (mixed subscription/advertising) business model. Hybrid is here to stay and that means more demand for ad servers, audience profiling and targeting, addressable ad delivery and global sales infrastructure.

Live sports streaming is the next tech challenge

If shaking up the market for film and TV wasn’t enough, global streamers are now rushing to snap up live sports rights, from Amazon’s deals for Premier League soccer in the UK and UEFA Champions League in Germany to Apple’s moves into global delivery of Major League Soccer (MLS) and rumours of a vicious big tech bidding war for upcoming US National Football League (NFL) Sunday Ticket rights that has already seen traditional buyers back away. Live sports streaming at scale on a global footprint is the next tech challenge and, of course, opportunity…