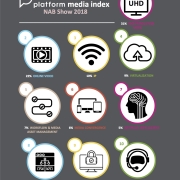 The Index provides a snapshot of leading media technology trends, the news being made by key players and the discussions media are covering around major events. The top five topics at NAB Show were ‘High Resolution Video’ (31% share of voice), ‘Online Video’ (22%), ‘IP’ – Internet Protocol – (10%), ‘Virtualization’ (9%) and ‘Workflow and Media Asset Management’ (7%). These five categories accounted for 79% of all NAB coverage tracked before, during and after the conference and exhibition, which took place in Las Vegas, April 9-12.

Gay Bell, Chief Executive of Platform Communications, says: “It’s an exciting time to be a part of the media and entertainment industry and observe how trends, and the conversations about them, are evolving. The Platform Media Index offers great insight into what topics as hot – and which ones are cooling.

“Last year, ‘Online Video’ was the talk of the show floor at both NAB Show and IBC, but this year ‘High Resolution Video’ was the topic everyone was picking up on. Discussion on the use of 4K for high-profile sporting events such as the Winter Olympics, Wimbledon, the World Cup and NBA games drove widespread coverage in the media. IP is another topic that went big, finally gaining mainstream attention from those attending NAB and writing about the show.”

Capturing close to a third of share of voice in the Index – up from 20% last year – ‘High Resolution Video’ moved from second place in 2017 to the top spot this year, underlining the fact that 2018 is rapidly emerging as the year 4K starts to come of age. Around half of TV sets shipped in Western Europe are now 4K and the number is even higher for North America and China. The growing consumer appetite for more high-resolution content was reflected in this year’s NAB news cycle, which saw a flurry of 4K solution launches. The media also picked up on the debate around AV1, HEVC and the future of codecs in delivering high resolution content.

‘Online Video’ dominated discussions at last year’s NAB and IBC shows, and despite ‘High Resolution Video’ leapfrogging it to first place, it has remained a huge topic of conversation, capturing more than a fifth of share of voice. Driving coverage around online video were stories discussing the continuing disruption of traditional business models by nimble over-the-top (OTT) players with on-demand services. Reports from NAB Show 2018 revealed that, to counteract the challenge to traditional TV, broadcasters such as Sinclair Television Group are looking to develop their own subscription video on demand (SVOD) offerings.

The term ‘IP’ took third spot. Its high placing in NAB coverage illustrates that the industry is extremely conscious of how fast it is moving towards an all IP world, particularly as cable and satellite providers continue to migrate services to IP. Rob Pergoraro of FierceCable called the switch to IP “the biggest change in television broadcasting since the digital TV transition”. Much of the conversation on IP stemmed from NAB Show’s IP Showcase, which featured over 60 manufacturers and eight of the industry’s premier standards bodies and trade alliances. 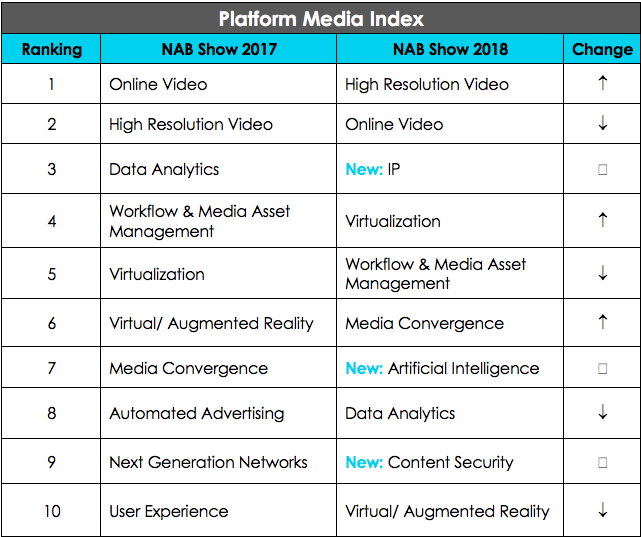 Along with IP, other topics that took their place in Platform’s NAB Index for the first time this year included ‘Artificial Intelligence’ and ‘Content Security’. ‘Data Analytics’ saw the biggest drop within the table, falling from third to eighth. ‘Virtual/ Augmented Reality’ also fell in the table, moving from sixth to tenth spot – reflecting a noticeable decrease in the number of VR/AR demos on the NAB Show floor since the previous year. ‘Automated Advertising’, ‘Next Generation Networks’ and ‘User Experience’ dropped out of the top 10 altogether.

For the full ranking download the infographic here, and for a breakdown of each topic’s ‘share of voice’, see below. 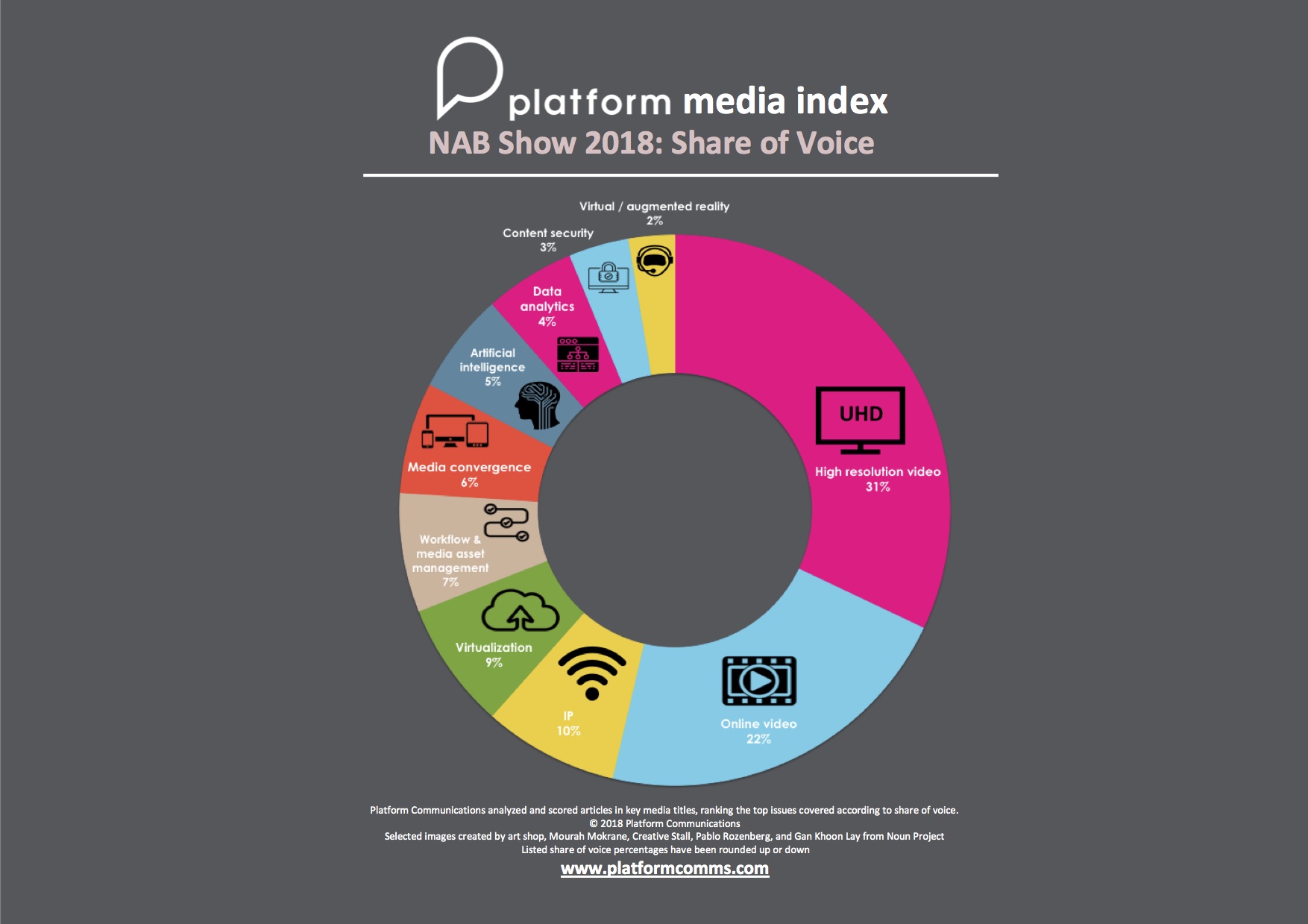